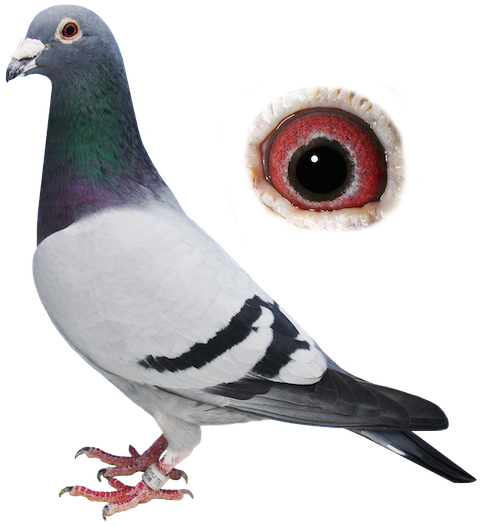 Notice: Only variables should be passed by reference in /customers/5/6/7/jpslofts.com/httpd.www/wp-content/themes/jpslofts/functions.php on line 167

The Machine is a 2008 bred bird which in just two short years 2010-2011 won the following positions in one of the most competitive areas in the U.K. The North East of England a place world famed for the coal industry, football and racing pigeons. The then unknown bird first won 114th Up North Combine Clermont 428 miles 942 yards with a flying time of 9 hours 6 minutes against 9,095 birds and then just two weeks later recorded a flying time of 19 hours and 55 minutes to win 4th U.N.C. Bourges 580 miles 815 yards 1,988 birds and 6th Open North East Homing Union from 2,829 birds. This race flown into a face wind was described by the U.N.C. convoyer Steve Profit as the toughest Bourges race that he had witnessed and he drove past the birds on his route home and watched them bravely battling against elements heading for their home lofts high up into the North East of England. Incredibly after less than two weeks rest the little warrior was back in the race panniers onto his next test where he won 20th U.N.C. from Andrezel a distance of 483 miles 1626 yards and another gruelling and testing 14 hours 18 minutes on the wing against 4,106 birds. By now the bird’s performances were the talk of the area.

For his efforts ‘The Machine’ won the title of ‘Bird of the Year’ in both the Up North Combine and the North East Homing Union for 2010 after flying a combined distance of 1,493 miles (2,402 kms) in just 28 days.

Surely there has never been a more deserving winner. I suppose a cynic would say yes but he never actually won a race but the more knowledgeable would say that this aptly named bird is worth ten single big race winners. Truly the series of amazing performances proved the bird to be a real ‘Ace pigeon’. These performances were achieved crossing the channel each time mostly in North East wind with inclement weather…

In 2011 the MACHINE once again sent their Champion ‘to the well’ which was a true testimony to the families faith in their pigeon to be able to conquer Bourges and once again he ‘brought home the bacon’ with a velocity of 988.5.

What this cock did on four separate occasions was to prove that he had the stamina and the guts to be up with the elite birds in each race which averages out at nearly 520 miles (780 Kms). Oh yes ‘The Machine’ is very accurately named because he never shows any tiredness or stress even after a near 600 miles (900 kms.) marathon race. Once home he simply claps up to his nestbox showing off to his mate as if he has flown 50 miles not nearly 600 miles!

It is worth noting that ‘The Machine’ won the U.N.C. FRENCH DIPLOMA OF MERIT for three outstanding results at over 440 miles and it is pretty amazing for a bird of such a young age of just 3 years old to achieve this award but this is a rather amazing pigeon that we are talking about. I was told that if it wasn’t for the worry of the bird being stolen that he would have been going back to Bourges again in 2012 as he is still a young pigeon with plenty more miles in his tank. He is a wonderful handling pigeon which is no surprise as he is a fantastically athletic pigeon having excellent balance and being the correct shape and soft, silk like feather quality as is the norm with the finest quality racing pigeons and make no mistake that is just what this bird is a true ‘Champion’ that few are privileged enough to own.

THE MACHINE was bought on Pipa by Ian Stafford and James Parker for a record UK price of 25,000 Euro and looks to be a super investment. Although it is still relatively early days, the children and grandchildren are outstanding.

On now to his mother and what superb breeding. She is a Double Granddaughter of the ‘man of the moment’ ‘Euro Diamond’ the winner of 1st Olympiad Category E in Oostende in 2007 after a string of fantastic National and International results. What I think many have overlooked, perhaps ‘dazzled by the brilliance of the Diamond’ is the part that his father ‘George’ plays. This stupendous breeder not only bred ‘Euro Diamond’ but also Broeckamp’s other main superstar ‘Minstral’ which not only won National Marathon Ace pigeon in 2006 but was also runner up to his ½ Brother when he was 2nd Olympiad champion Cat.E in Oostende. I think that this highlights just what a magnificent breeding pigeon ‘George’ was. It is small wonder that the pigeon world was shaken to the core at this double Olympiad result in Oostende the very ‘Cradle of the pigeon sport’.

JORDY has proved his breeding prowess as he has also bred another bird ‘Young Derby’ which has won 1st U.N.C. Yearling Derby and 22nd Open U.N.C.. Additionally another bird and a full brother to ‘The Machine’ was the U.K’s. most consistent pigeon in the 2008/2009 Sun City Million Dollar race series. This again proving that the children from this coupling have what we call the ‘right stuff’. Also in 2013 a son of JORDY won the coveted 1st up north combine Bourges for the Marshall and smith partnership whom James would personally like to thank for allowing him to by such a special pigeon like THE MACHINE. 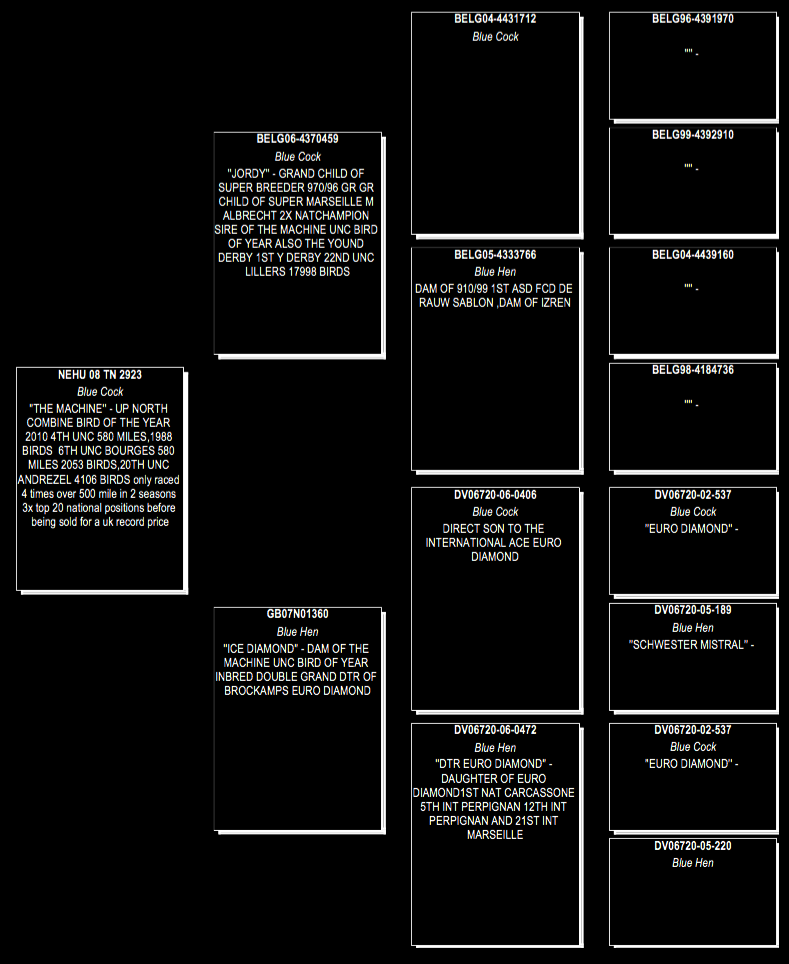