Learn more about J.P.S. Lofts, our partnership and our mission

We fly in 2 partnerships one of which is  of James and Pete Parker flying in a small village in Reading Berkshire ,the other is Ian Stafford and Mark Wilson flying in Skinningrove in the north east of england

Pete Parker has had pigeons for many years, on and off, fitting them around his work. Pete is now retired and spends his time looking after the birds, in fact he is there from dawn to dusk.

In 2008, James decided to take a more active interest in the birds and began spending my spare time with my dad at the pigeons and my interest grew. I quickly realised that there was more to pigeons than corn, water and the odd race win. We therefore decided in 2008 to search out a top fancier who had won consistently over many years at a high level with top class bloodlines. As luck would have it, my father used to travel to the north east 30 years ago to a small village in County Durham. He stayed with a pigeon man who later became the partner of Ian Stafford and I had noticed Ian’s name regularly cropping up as a winner and more predominantly breeding winners all over the UK. We contacted Ian and consequently purchased some birds on Ian’s recommendations. Straight away these birds made a big impact on our performances, especially at national level. 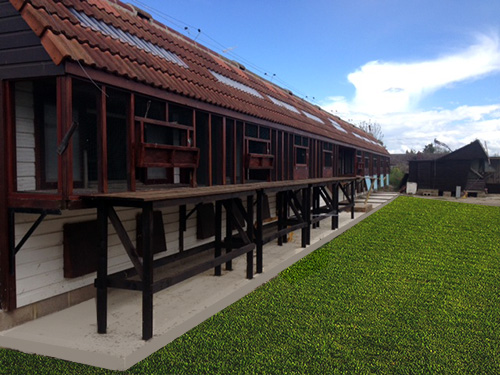 Friendship grew between Ian and ourselves and in 2010 we decided to go into partnership with him in the search for superior bloodlines. Our buying power obviously increased as two bank accounts were better than one! This meant that the youngsters from our stock loft would be tried in two loft locations, giving us a quicker insight into which bloodlines would prove to be the best. The main criteria we looked for was winning genes, especially long distance. We were more interested in individual winners or children of Interational / national winners than going for any specific family.

Our partnership with Ian suffered a setback when Ian was diagnosed with cancer in 2013 when he decided to call it a day and sell all his birds.

We went along and allowed Ian to sell some of the birds bought together, however there was no way I was going to allow The Machine to go to another loft so I bought him back. The money we got back from the sale of our joint birds we reinvested in even more top winning bloodlines, as my philosophy is winners breed winners and ace pigeons breed ace pigeons and there can never be enough winning genes in the immediate pedigree.

In 2014, we sufferered another major setback. I was diagnosed with a brain tumour and had to undergo 8 hours of brain surgery, so with me being out of action we asked Ian if he could give us a bit of a hand and Ian travelled down to Reading every week and helped my father with the running of the lofts, by which time Ian was on a watch and wait programme with the hospital for his cancer and was feeling ok in himself. After my brain surgery, I recovered more quickly than anticipated and the travelling was becoming stressful and tiring for Ian, so he therefore stopped coming down. Ian asked us if it would be possible to renew our partnership with the birds as he was now on chemotherapy and the tumours had almost gone. Our partnership has now reinstated and we have both  invested heavily in some new birds to service both lofts, which was the initial plan at the start.

We are both now in better health and looking forward to racing in the future.